This Christmas Eve people all over the world will log on to the official Santa Tracker to follow his progress through U.S. military radar. This all started in 1955, with a misprint in a Colorado Springs newspaper and a call to Col. Harry Shoup’s secret hotline at the Continental Air Defense Command, now known as NORAD. 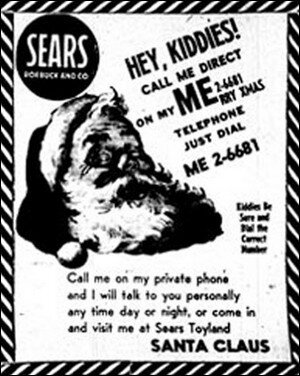 The Santa Tracker tradition started with this Sears ad, which instructed children to call Santa on what turned out to be a secret military hotline. Kids today can call 1-877 HI-NORAD (1-877-446-6723) to talk to NORAD staff about Santa’s exact location.

Terri remembers her dad had two phones on his desk, including a red one. “Only a four-star general at the Pentagon and my dad had the number,” she says.

“This was the ’50s, this was the Cold War, and he would have been the first one to know if there was an attack on the United States,” Rick says.

The rest of the story at NPR